We're happier than we've ever bean.

My little brother is currently recovering from severe aplastic anemia, a rare disease that affects 4 in a million people.
His myriad of Western medicine thrice a day means that, in as much as we'd like to boost up his energy levels and general health with Chinese herbs, none of them should be included in his diet in order not to cancel out the effects of the medications.
What we can use though, are to include the regular cooking ingredients with certain specific benefits to replenish and nourish his organ and nutritional health.

One of things he's insistent on, is a diet rich in beans.
Dried beans are actually not just a rich source of protein as most already know, but they also are rich in iron, phosphorous, calcium and dietary fibre.
All of which are essential for an energy boost, maintaining and repairing body tissues, muscles and cells. (In particular his blood cells)
According to Traditional Chinese Medicine, 'black' based foods nourish the kidneys.

So here we have two different soups with black beans dependent on your choice of meat.
I used anywhere from a third to a half cup of black beans, washed and soaked for half an hour before washing and draining it again.

1. Blanch chicken parts in water to remove congealed blood and any bone dust or fragments in meat from the chopping process.
*I chopped all parts at the joint in order not to have excess blood from broken bone parts so it would be fine to skip the blanching step if this is done for fresh chicken.

2. Fill the pot with 2 litres of water and place all ingredients except the wolfberries, into the pot, before bringing to a boil.

3. Add the remaining water and bring it to a fierce boil before lowering the flame, add the wolfberries and let it simmer.

4. Add 1.5 teaspoons of salt or to taste and leave to simmer for 30-45 minutes, or until the black beans soften, before turning off the flame.

5. Bring to a boil just before serving. 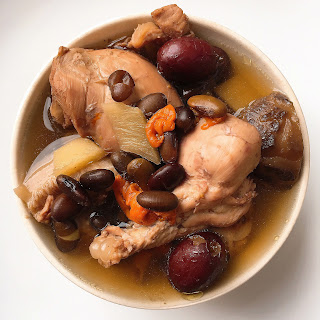 If you decide to use pork ribs, I used 500g of short ribs, added in one carrot and purposely left out the dried cuttlefish because my little brother is allergic to it.
Do add that in for an added layer of flavour and sweetness. 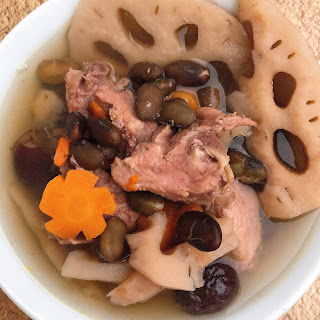 Thanks for everyone who has been checking in on us.
We're very thankful for all the love and support that we've been blessed with.
If you'd like to check in on him and to pray along with us,
Https://give.asia/aplastic
Https://aplasticaffair.blogspot.sg

From our kitchen to yours,
Brenda 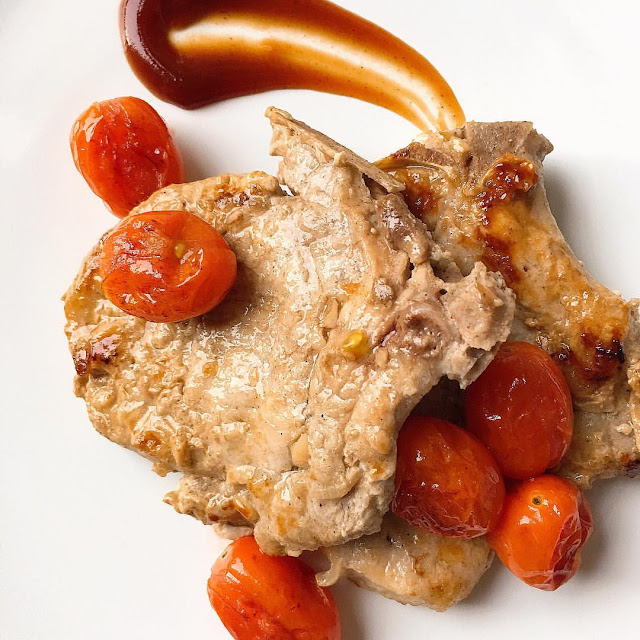 Marinade for the pork chops:
0.5 tablespoon of Kikkoman Soy Sauce
1 tablespoon of oyster sauce
1 small knob of old ginger, sliced
2 cloves of minced garlic
1 teaspoon ground white pepper
1 tsp of Shaoxing wine
Marinate two pork chops well and place into ziplock bag, along with the rest of the marinade. Leave overnight to marinate.
Heat two tablespoons of #BenefitCoco oil in a pan, place the pork chops into the heated oil and pan fry it on both sides till cooked through. Pour the remaining marinade over the pork chops as you pan fry. Add in cherry tomatoes and pan fry it on both sides with a teaspoon of #BenefitCoco oil till blistered.
Serve with a side of honey bbq sauce. (:

（鸡）不择食 : Chicken rice- Local delights in the comfort of home

For chicken stock and chicken
1 medium whole chicken
1 packet of chicken feet, nails and calluses removed.
2 large carrots
Half a head of lettuce
1 heaped tsp of salt (to taste)

For rice:
3.5 cups of rice
Chicken stock as required
1/4 tsp of salt (to taste)
Chicken oil

Method:
1. Boil chicken feet and bones and chopped carrots in a big pot of water enough to fully submerge a whole chicken. Boil on high heat then simmer on low heat for about an hour. Add salt to taste.
2. Place whole chicken into the broth.
3. Bring to a rolling boil for a few minutes before turning off the fire. Leave the chicken to cook with residual heat for about an hour.
4. Remove from stock and submerge in iced water to stop the cooking process.
5. Fry reserved chicken fat with two tablespoons of sesame oil, minced ginger and smashed garlic. Remove chicken fat.
6. Add chicken stock into rice, a dash of salt and the chicken oil with ginger and garlic.
7.  Bring the remaining chicken stock to a boil and blanch chicken with the soup to slightly warm up the meat before chopping to serve over a bed of lettuce leaves. Drizzle sauce over the chicken.

For the sides:
1. Add one tablespoon of oil and fry minced garlic till fragrant.
2. Throw in beansprouts and stir fry on high heat.
3. Add in oyster sauce and chicken stock and stir fry.
4. Add in pan fried tau kwa and fried tofu puffs and stir fry to mix thoroughly with sauce.


From our kitchen to yours,

What's in a name?

I guess the chilli part didn't need to be stated since we're talking about a Thai dish here.


So it's taken me too long to get down to trying out a dish as simple as this.


You'll wonder why you ever needed to read a recipe on this. ;)

Method
Clean and squid and remove the skin as much as possible. Slice it into rings but don't cut it through.
Steam them for 3-5 minutes. Keep tabs on them! They'll be overcooked before you know it. I'm not squidding you! And you're not gonna fancy have rubberbands for dinner.

Once the squid is ready, pour out steaming liquid from the steamed squid into the sauce mixture and ladle the final mixture generously over the squid.

From our kitchen to yours,

乱中有序。Skipping the meat on this version of chap chye. :)


1. Wash the dried mushrooms and soak till reconstituted. Drain but keep the liquid (mushroom water) for use later. Cut the mushrooms into strips. Set aside.
2. Meanwhile, soak the dried shrimp, black fungus, black moss, golden lily buds in separate bowls of water for about 10 minutes. Drain each item and set aside. Tie the lily buds into knots and trim the ends. Set aside.

From my kitchen to yours,
Brenda x

This must be Confucius' Favourite dish. The eggplant that doesn't have any egg. 鱼香茄子但有没有🐠哦。

Shallow fry brinjal slices. Heat three tablespoons of oil in the pan, place brinjal slices skin side down. After a few minutes, turn it on its side and repeat till all sides have been shallow fried. Set it aside on some kitchen towels to drain the oil.

Heat up the reserved oil and fry the remaining minced garlic with the white portions of the spring onion till fragrant.

Add in the minced pork and fry together with the spicy bean paste. Add the brinjal and blanched carrot slices. Stir fish sauce, oyster sauce, dark soya sauce and a squeeze of lemon into 100ml of water before pouring it over the ingredients in the pan. Give it a good mix to ensure that the sauce coats the ingredients evenly.

When it starts to bubble, turn the heat to low to let it simmer for 5 minutes. Then turn up the heat and thicken the gravy by stirring in cornstarch mixture to desired consistency.

Garnish as desired and serve hot with rice. Maybe two servings of rice. :)

Bring 1200ml of water in a pot to a rolling boil, and add in the osmanthus flower petals. Then simmer it on low heat for 2 minutes.

While on low heat, stir in the Konnyaku Jelly Premix till completely dissolved. Use a balloon whisk if you have one.

Then turn off heat and let it cool a little before transferring it to desired jelly mould. I used a regular square glass ceramic container.

Give the solution a quick stir to spread out the osmanthus flower petals, wolfberries and diced chestnuts before chilling it in the fridge for at least 2 hours till firm before serving.


From our kitchen to yours,
Brenda x

min~*
For any advertising, recommendations, media invites or enquires please email me at : istophere@gmail.com